I had just bitten into the soft, almost bitter, chocolate when I heard the first crack. Somehow, that truffle melting on my tongue gave me a quiet strength, and I moved into a state of calm, as I realized what those sounds were.

I wanted to run from them

I grabbed Yvette by the sleeve and towed her into the hallway, away from the windows, before the door at the other end of the studio burst open. Moving without a sound, we melted through the fire door, then flew down the stairs, the gun shots growing dimmer behind us.

Some things I only thought of later, much later: how grey everything was, the walls, the light, the sky, our clothing, even the taste in my mouth, and how I had a pencil tucked behind my ear, and it stayed there the whole time.

The police in their black gear looked frightening and I wanted to run from them, but I let them to lead me to a room where a medic shone a light in my eyes.

Now I can’t seem to turn off my lamp. 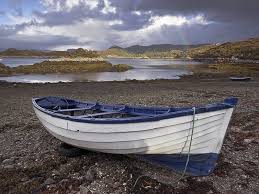 It was completely idiotic, but she made believers out of all of us.

I thought she was going to teach us to crochet, but instead we were all transported to another world, one where our needlework was no mere pastime, but essential to our way of life. Without our weaving, no nets, no fish, no food. Suddenly our silken skeins were the thread of life, and our work was sacred and revered.

Feeling the yarn slide through my fingers I am connected to the lambs who gave their fleece as well as the men in their boats, hauling silver from the sea.

We light candles for our fishing men, made from wax, by bees who drank from buckwheat blossoms. The light in our hearts spun out over cold and treacherous waters. We know that our nets, woven with love, would bring them home to us, whole.

As I travelled deeper into the jungle I found I needed less and less. So many things that I packed, items I was sure I could not survive without, soon became extraneous baggage and were abandoned or bartered away.

My high tech Goretex rain jacket, rush-ordered at great expense, became a sodden rag weighing down my pack. When I discovered how preferable it was to let the rain cool my skin, I exposed as much as I could safely bare.

The costume of the equatorial hiker became simple: khaki shorts, quik-wick underpants and a sports bra. Seriously, in that context, wearing any more was bizarre. My guides wore next to nothing, and modesty was never an issue.

Not heat-stroking, avoiding poisonous reptiles, making progress before the next flood: these were important. Vanity died a swift and uneventful death.

Back in ‘civilization’ I feel overdressed to this day, my proper blouse and jacket some sort of camouflage. I can’t wait to feel the air on my shoulders. As I head home I shuck layers of the costume for something that feels real.

Title: “Yoo-Hoo, Mrs. Goldberg!”
Author: Marguerite Beck-Rex
Rating: G
Word Count: 395
Summary: Appearances may be deceiving, but the story is even better than you think.

Molly was one of the first to catch my eye as someone I wanted to get to know when I moved into my 460-unit upper Connecticut Ave. coop building. She looked like an older white-haired version of dark-haired Molly Goldberg, my favorite main housewife character in a 1930s radio (and then television) program about neighbors in a Bronx apartment building who leaned out windows to call to each other to exchange gossip. “Yoo-Hoo, Mrs. Goldberg!”

I imagined still more. This new-to-me Molly would probably have grown up in New York City, like me, and would be further left than me, probably a socialist, and certainly on the side of working people.

Ours is an unusually friendly building, and it wasn’t hard to invite Molly for morning coffee so that we could get to know each other. We settled on tea in her apartment. Molly and her husband were new to the community as well.

Molly told me that she was a retired academic–an urban anthropologist–and had never lived in New York, much less in the Bronx. But she certainly knew the radio program I’d thought of when I first met her. Because of her first name, as she grew up she was teased by other kids shouting at her. “Yoo-Hoo Mrs. Goldberg!” I wasn’t the first to have that idea.

In her retirement, Molly is a playwright, specializing in one-character or two-character short dramatic works. Currently, Molly is confirming my initial notion about her political leanings, by writing a one-woman monologue on the life of Secretary of Labor Frances Perkins, the first woman appointed to a Presidential cabinet position.

Molly also quickly became the bossy, almost irascible chairperson of our building’s volunteer network. I, and apparently others, on one occasion walked out of a meeting Molly was chairing. That one night Molly was fully irascible, and more politic people than I found ways to ease a transition to a new chair of the volunteer network.

Molly and I since returned to being friendly in a wry sort of way. I love running into her, and am happy to see her moving about since we’re both of an age at which health and mobility sometimes are issues. Our favorite exchange of greetings is: “How’s your creative life these days?” “Well, how’s your creative life?”

Author Marguerite Beck-Rex is a writer and artist living in NW DC. You can see her blog here: Ink Paint Words

It’s sticky in here, inside a youngster’s pocket.

I hold the magic found all around that no one else seems to notice.

A flower petal, a chewed lollipop stick, a piece of Scruffy’s hair, a cheerio, a crayon-still in it’s sleeve-broken but held together by the paper,…

Oops…everything is going away, and I’m getting wet, going for a spin…weeeeeeeee!!!

Now, it’s all nice and warm and another spin…..

Getting a little shaken up here, but now I’m  settled in a cozy drawer, lined with teddy bears.

Waiting and hoping to be picked for the next, magical adventure.

Thanks, Lynn for the wonderful adventure! Check out Lynn, a wonderful singer/songwriter on her site here: www.lynnhollyfield.com

Hopping as she forces her shoe on, Holly looks at the clock and curses. “Fuck! I’m going to be late.” Her cat opens one eye to glare at her. “Shut UP!” she snarls. “Someone has to buy the catfood.” Grabbing her messenger bag she hurries out, slamming the door. The cat goes back to sleep.

The day is radiant. This causes Holly to scowl, because it means a crowd. A noisy crowd of sticky kids and their overfed parents. She breaks into a trot, minding the uneven brick walks as dappled sunlight flickers across her face.

“Aye, me wench! ‘Tis aboot time you got yer arse on board!” Her boss grabs her arm roughly and heaves her onto the deck. “You’re not even dressed” he hisses. She shoots him a poisonous look and scrambles to her feet, dashing below decks.

The Pirate Cruise is a tourist favorite in Annapolis, and on this perfect May Saturday the boat is packed, as Holly had feared. She squeezes through the throng sideways, ignoring the leering looks and praying for no butt-pinchers this trip. She hates this costume with it’s exagerated cleavage and long hot petticoats. But it’s a living.

She finishes delivering drinks and heads to the forward deck. Hiking up her skirts to climb up on the prow, Holly gazes out over the water, sparkling with light and activity. She wishes she really was sailing away on an adventure. Maybe someday. With a sigh she adjusts her eye-patch, then turns to eye her appreciative audience. “Whatcher lookin at, ye scumbags?”  They beam.

Title: Take Me With You
Author: Patrise
Rating: G
Word Count: 195
Notes: Written using the photo as a prompt. I didn’t know who she was until after I wrote this. Click on the picture for more about her.

The last time I saw my sister was the day we went to dad’s grave, way up on Grey Mesa. Nobody lives up there now; it’s a national forest. She was so unaccountably cheerful, enjoying the outing and her new hat, and excited about her upcoming move to Minnesota.

The rutted road made the ride hellish for my old bones, but despite her being my older sister she seemed more like a schoolgirl on holiday than a septuagenarian.

Mirabel, 8 years my senior, was always the adventurous one. When I was still a dutiful daughter she married a flyboy and moved off to some airbase in the South. She used to send me postcards; strange places with alligators and palm trees. She complained about the bugs and the vines and the wretched heat.

I thought she was silly to leave Silver Lake. Why would anyone want to live anywhere else?

That was so long ago; now I lie here listening to the muffled highway whine and the beeping alarms going off somewhere down the hall, wishing I’d grabbed her hand that day at daddy’s grave and whispered “Take me with you!”

Welcome to Imagined Voyages, a blog for short fiction.

At this point in my life I am pulling up roots by selling my beautiful, maybe even Dream, house in order to downsize, right-size my life.

The financial crisis of recent years hasn’t left me in such dire straights as many people, but a job loss and refocusing of my purpose and mission mean that working to support a big exurban home and all my possessions is not in line with my real values. So the answer is: Change!

Change to what, where, you may ask?

I. Don’t. Know. That’s the funny thing, the terrifying thing, the brilliant thing: I don’t know where I am going. I’m allowing that to be just fine for now, and dreaming of new ways I could live. And those flights of fancy are the genesis of some of these tales.

Enjoy! Comments are love. and share links to your own writing adventure!

Welcome to Imagined Voyages, a blog for short fiction.

I'm a 50-something single artist pulling up her roots and setting sail to the unknown, imagining destinations, trying on hats, revisiting missed opportunities, and following the Muse where she leads.